A new version of It’s a Firefly Night, illustrated by Betsy Snyder and published originally in 2013 by Blue Apple Books is being released this month, and I couldn’t be happier!  Originally published as a hardcover, it’s a paperback this time around, with a glittery cover and lots of brand-new extension activities in the back matter.  (For a sneak peek, and more information, check out the publisher listing at www.blueapplebooks.com/book/its-a-firefly-night/.)

When the book first came out, we did an interview discussing how the story came about in my imagination and then made its way to the bookshelf.  I’ve gotten permission to reprint the article here, which is also posted on the newly-updated BAB website (www.blueapplebooks.com/dianne-ochiltrees-firefly-nights/.) Here it is in its entirety:

Dianne Ochiltree, author of It’s A Firefly Night, recalls the firefly nights of her own childhood in Warren, Ohio. “Before bedtime, I would go outside in my nightgown just like the character in the book. My dad would ask me: instead of a bedtime story, would you like to go catch fireflies Dianne?”

Catching fireflies quickly became “our special thing. When you’re little, your backyard looks like the universe. I come from a big family, so I cherished this alone time with my dad. We were the only two who could look up in the night sky and say, ‘Wow, that’s something else.’”

Dianne brought these memories to life in It’s A Firefly Night, a story of a curious little girl and her dad who find magic in their own backyard. The little girl counts the fireflies and marvels at her “jar like a light bulb that’s just come alive.” In the end, she sets them free.

“The girl, as I was taught by my dad, is borrowing these fireflies and enjoying them, but she knows she does not own them. She lets them go. It’s like the Native American idea that we should not try to conquer nature. This story is about coexisting with nature and caring for the land.”

Dianne’s story is brought to magical life by Betsy Snyder’s illustrations. Dianne and Betsy had never met before working together, but they found an instant connection in their childhood memories – Betsy had also grown up catching fireflies in Ohio. When Dianne saw Betsy’s artwork for the first time, “It absolutely knocked my socks off. It matched exactly the movie that was playing in my head.”

“In children’s stories there’s a lot of emphasis on moms and daughters doing things together, and sons and fathers doings things together. But Betsy and I both experienced very strong relationships with our fathers.”

She was also tickled by the flourishes Betsy added that were not in the story. “There is a dog in there that I never mention – but he adds so much to the party! I love that collaboration. That’s why writing picture books is so much more fun than writing poetry or novels. You’re not out there on your own.”

Dianne hopes It’s A Firefly Night will inspire children to turn off the iPads and to seek out nature in their backyards and beyond. “I hope they unplug and feel the curiosity I felt. A firefly is so small that when you let it go among the stars, you realize that we’re part of something really grand here.”

There’s one last reason that Dianne is so fond of fireflies. “Fireflies use their lights to send messages and to communicate,” she says. “In a funny way, they’re storytellers too.” 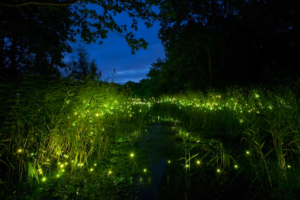 As with the original version, my hope is that this new It’s a Firefly Night edition will inspire a fresh generation of moms, dads, and grandparents to create a magical summer night memory or two with the little ones in their lives.  If you have any favorite firefly memories you’d like to share here, please do.